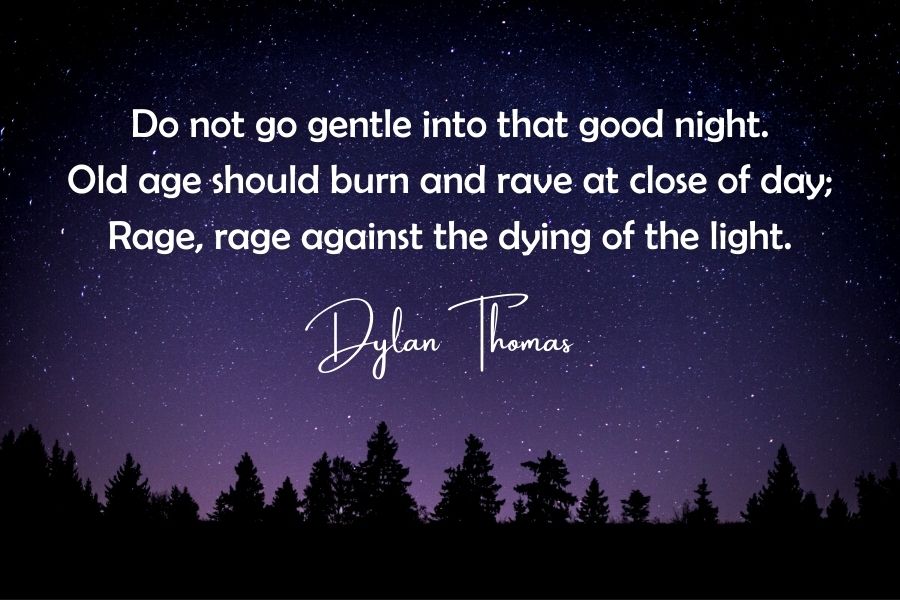 Rage Against the Dying of the Light—and Regrets

This poem has in some ways shaken me to my core. The only fear that I really have in my life is the fear of having regrets. Nothing motivates me more. Nothing.

Read on for a bit of a glimpse into my story.

One of the prime reasons that poetry can be difficult for readers is because effectively connecting with the poetry ultimately requires a connection with, or at least a level of understanding of the poet.

This is a repeating mistake that occurs in practically every poetry analysis class. Students are prompted to describe “what a poem is about.” Students, quite naturally, perform that task almost solely from their own thoughts, feelings, prejudices; rarely incorporating all those points of view from the mind of the author.

“Do not go gentle into that good night” is considered one of the most well-liked pieces of modern poetry. But, it isn’t until the reader begins to process the poem against the backdrop of Dylan Thomas’ life that the pieces begin “to fit.”

Who Was Dylan Thomas?

What is it about Dylan Thomas’ life that makes the “Rage” relatable if not understandable?

We actually have something rather unique to help answer this. We have Mr. Thomas reading this poem. This is what opened my mind—or, at least, began the process.

Dylan Thomas enjoyed personal successes with his work early in his career. He was acclaimed even as a teenager.

His work did not provide the means, however, for a comfortable lifestyle. He was a tormented spirit. He was an alcoholic. He suffered from breathing problems. His marriage was contentious. Eventually, he died after passing into a coma.

Perhaps this begins to paint the backdrop for his work, and his views on life, and especially this work.

His father passed away some time before this poem was published. It is widely accepted that that event formed the basis, emotionally, for this poem. (No poem, however, really ever has a singular message).

Poetry is a challenge. It is the challenge of a writer to meet the needs of the reader, not the writer. It is our job, when writing about poetry, not to illuminate a predetermined path for the reader.

I believe that especially as it relates to poetry—and, this may seem like a contradiction—but, the author needs to tell his story. The story needs to be told, not to uncover what might attract the reader to connect, but to expose the author’s heart and emotional state of mind.

Go back to the link above and listen to Dylan Thomas’ reading. Does it truly speak to you as if from his heart? Do you hear him telling the story from his father’s point of view? When confronted with “the end” it IS time to rage. However, you will learn that that rage needs to start much sooner rather than at “the end.” 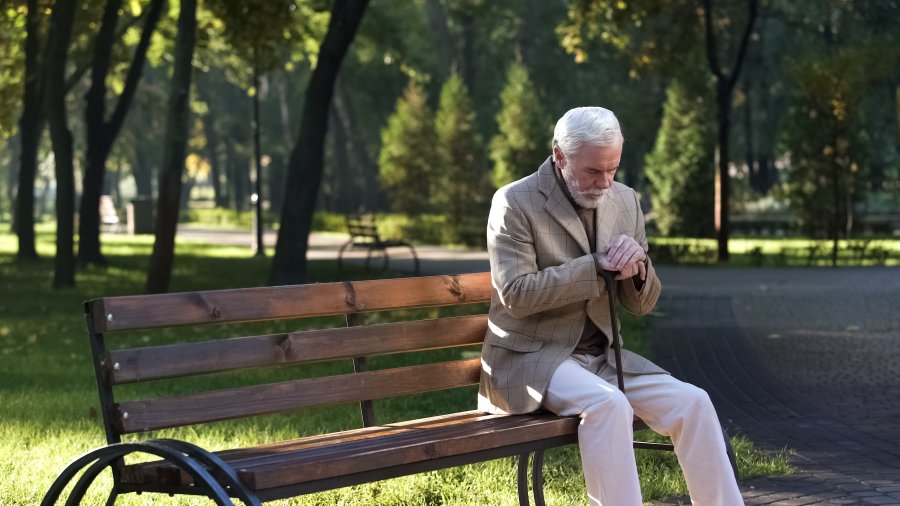 Go Deeper—Confront Your Life Before Regrets Set In

The power of this poem, as is the case with quality poetry, is that through telling his story and his father’s, I get it.

I see myself in this poem as well as the final moments of a departed parent on their deathbed, physically raging, not just against the expiration of the light of their life, but the un-winnable fight against regret.

Maybe, just maybe, that is what Dylan Thomas was getting at most.

The death of his father screamed unmistakably not just about the regrets his father must have had, but ricocheted back at Dylan. “What have I really accomplished in life?” Who have I impacted?” “What joy have I brought to his world?” “What have I not done that I should have?”

I see a much bigger story than “raging” against the fading light of our earthly existence. In fact, I don’t primarily see this as a story about death as a single event in my life as to what this poem means to me. Succumbing to lack of motivation, selfishness, not looking for or creating opportunities would be giving in to the dimming of MY light.

My “rage” was born out of  the time when I took life for granted. I lost confidence in myself. I succumbed to feelings of inadequacy, lack of self worth, and yes, depression.

This is what Dylan Thomas’ meant to me. I didn’t realize it, of course, for a very long time. I am not sure that during this time, I really had any goals. Life’s routine and relationships ruled my life. I had lost the fire, but I know at my very core that opportunities were awaiting me if I were to apply my passions with a new….rage. 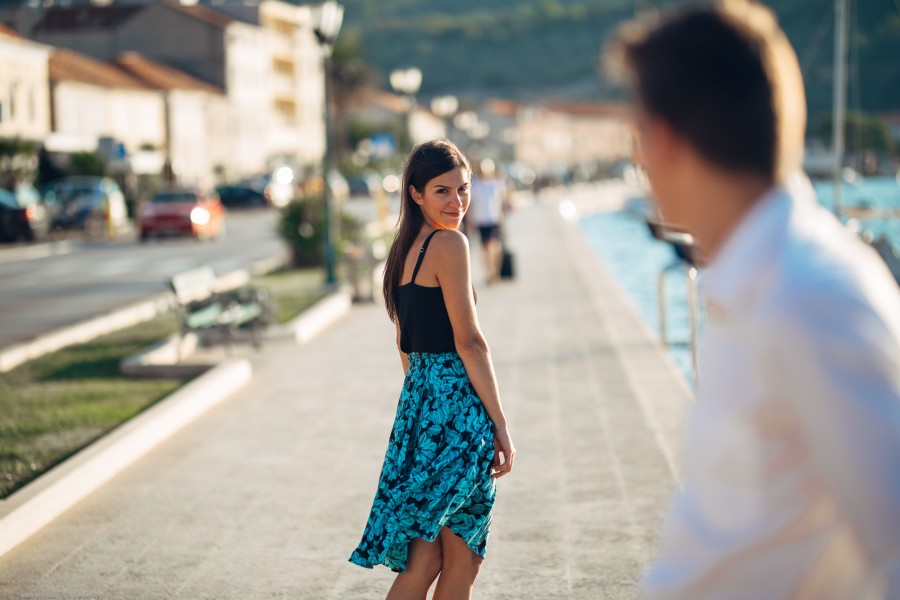 My rage began then. I recognized how blessed I was with the skills I had and had developed. I recognized that my light needed to shine.

For me, that means how I value the recognition of and need to act on opportunities WITHOUT FEAR of outcomes. My life was ruled by fear. I allowed that to happen. I had to “break the mold” that was controlling me—that I allowed to control me.

However, I never felt that I had succumbed to the dying of my light.

After I left my undergrad program without graduating, for example, I enrolled elsewhere and got my undergrad degree. Then, I decided on a graduate program, for which I had not even had the prerequisites. I took care of that and graduated with my MSEE from USC in a very challenging program.

Why do we need to rage against the dying of our light?

Why not just “take it all in stride”? Why shouldn’t we just let things play out as they are “meant to”?

This is REALLY what Dylan Thomas is getting at—more than a raging to put off impending death.

The wise man worries that his “words had forked no lightning.”

In other words, the wise man worries that his ideas will not live on. Every character in the poem regrets the things he left undone. When we turn a light on in a dark room, every corner of the room is illuminated. No corner, no space, no “spec of darkness” can hold back the light.

There will be no greater pain that we endure in life than regrets. That is why we can not simply let things “play out.”

Feel the words painted by the images. When you view the following clip, think and feel.

What resonates with you most? Making choices, regardless of outcome and the joy that comes along with choice? Or, do you feel and see regret? Which is it and why do you think that is what you feel?

Events in our lives can often result in one of two outcomes: They are a source of lifelong light that we need to RAGE against losing NOW and every day or we will face the regret of NOT RAGING against the loss of that light.

This video presentation of this poem AND the soundtrack from Hans Zimmer. Few two minute video clips move me as this does. We all need to be moved emotionally.